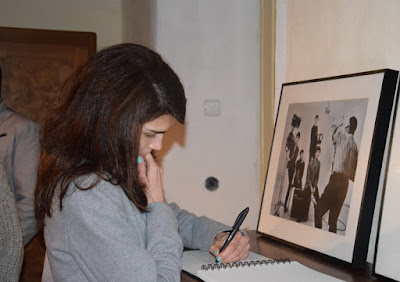 Dezo Hoffmann was the first professional London based photographer the Beatles worked with on a regular basis. Their association was mainly in 1963, although Hoffmann also travelled with them to France and USA in early 1964.

Many of the photos Dezo took of them were used on promotional material, concert programmes, memorabilia and in the "Meet The Beatles" magazine, as well as on the collector's gum cards of the early years.

In the early eighties, Hoffmann guested TV-shows in the U.K., USA and Australia, showing some of the amateur films he had made during photo sessions with the Beatles. And often, scenes in these films were shot by the Beatles themselves. After having been introduced to amateur film cameras, the Beatles all bought similar equipment and began filming themselves, mainly on holidays.

Originally of Slovakian origin, Hoffmann spoke with a thick accent. Now, in the 250 years old house where he was born in 1912 in the city of Banská Štiavnica, a museum dedicated to him has opened. After twelve years of reconstruction, its current owners, brothers Michal and Šimon Šafařík, decided to open the house to the public, regional daily My Žiar reported. Their primary interest was to create a museum about Dežo Hoffmann with his original photos and personal objects they gained from his daughter and other sources.

The owners want to organise events connected to this Hoffmann museum, such as various workshops. Besides the museum, accommodation is also a possibility.

Hoffmann was born in 1912 in Banská Štiavnica, which was then located in the Kingdom of Hungary (hence, Dezo has always been referred to as being of Hungarian origin), but what with the changing borders, the town is now in Slovakia. After studying journalism in Prague, Hoffmann worked at Twentieth Century Fox in Paris as a photojournalist. During Mussolini's invasion of Abyssinia he was sent to make a documentary of the invasion. After returning from Africa he was sent to Spain to film the 1936 People's Olympiad (a protest against the official Olympic games in Berlin under Hitler's propaganda). Soon after he arrived in Spain, the civil war broke out and Dezo found himself on the barricades. In this period he met personalities such as Hemingway and Robert Capa. Allegedly the three men formed an inseparable trio.

Facing war dangers Dezo was injured a few times. The third injury was serious, leaving him without memory for several months. After recovery he moved to England and joined the squadron of Czechoslovak pilots flying with the RAF during World War II.

After the war he remained in London, working for various newspapers and magazines. In 1955 he began his collaboration with Record Mirror magazine, which was the start of his career photographing show-business celebrities.

In 1962 he went to Liverpool to shoot an unknown but promising group - The Beatles. Mutual appreciation and sympathy led to a long-lasting relationship between Hoffmann and the group.

During the following years Hoffmann's famous photos of The Beatles attracted the attention of many other stars. He was regarded as a "nice chap" who was appreciated and welcomed wherever he went despite his strong foreign accent.

Hoffmann sold 100 of his Beatles negatives to Australian Colin Kaye whose Silver K Art Infinitum continues to manage sales of editioned archival prints from them. The remainder of Dezo's archive of approximately 1 million photographs of countless pop musicians and showbiz personalities was acquired by Rex Features,the photo agency and photo library which had represented Dezo for worldwide media sales of his work from the early 1960s until his death.

During preparations for the Beatles' Anthology series, their Apple company bought the rights and negatives to Hoffmann's Beatles photos, and have used them for promotions as well as for record sleeves ever since. Hoffman's photo collection of the Beatles has been on display at the Egri Road Beatles Múzeum in Hungary since 2015.

In 1967, a film student made a documentary about Dezo. Part 1 can be found on YouTube. Unfortunately, copyright restrictions have prevented the second part to be published there.

Source: The Slovak Spectator and Wikipedia
Posted by wogew at Wednesday, November 06, 2019

"In 1962 he went to Liverpool to shoot an unknown but promising group - The Beatles."

This is a myth created by Dezo in interviews during the 1980s. His first encounter with the Beatles was in fact at EMI Recording Studios in London on 4 September 1962. His first (and only) trip to Liverpool to photograph the Beatles (a highly successful session) was on 24 and 25 March 1963.

Although perhaps lacking the imagination of Robert Freeman and Robert Whitaker, Dezo took many iconic shots of the band. I wish the museum well.