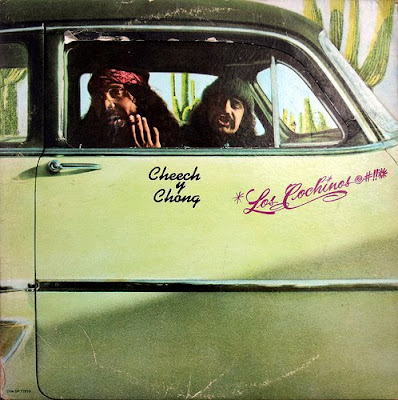 "Basketball Jones" is a 1974 animated short film based on the Cheech and Chong song "Basketball Jones featuring Tyrone Shoelaces", from their album Los Cochinos. The cartoon was created to promote the song's release in the United States. It is about a teenager named Tyrone Shoelaces and his love of basketball. It was rumoured for many years that Ralph Bakshi created the short, when in fact it was designed by animator Paul Gruwell. The song is a parody of the 1972 soul ballad "Love Jones" by the group The Brighter Side of Darkness. At the end of the short is an appearance by all four members of The Beatles (with George Harrison on guitar, just as he played on the original track) sing along to "Basketball Jones." In the 1979 film "Being There", Peter Sellers can be seen watching this cartoon.
Credits:
Cheech Marin - Tyrone Shoelaces (voice)
Darlene Love - Cheerleader (voice)
Michelle Phillips - Cheerleader (voice)
Ronnie Spector - Cheerleader (voice)
George Harrison - lead guitar
Klaus Voormann - bass
Jim Karstein - drums
Jim Keltner - percussion
Carole King - electric piano
Nicky Hopkins - piano
Tom Scott - saxophone
Billy Preston - organ
Posted by wogew at Saturday, September 24, 2011

We have a righthanded Paul, but tIt's OK...