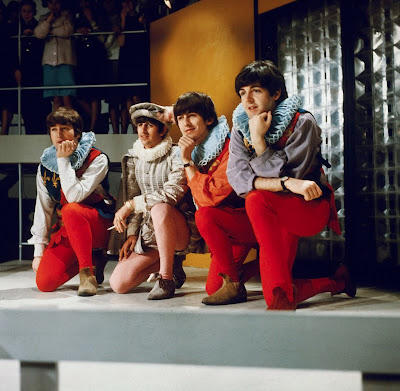 Sunday movie: Around The Beatles
A TV Special, filmed at 11.00am, Tuesday 28 April 1964 in black and white.
The Beatles recorded the television special Around The Beatles between 9pm and 10.15pm, at Studio 5AB at Rediffusion's Wembley Studios, London.
The group arrived at the studios at 11am to take part in final rehearsals, although during the day they also gave interviews to Swedish radio, speaking to visiting host Klas Burling.
The hour-long show featured, along with The Beatles, PJ Proby, the Vernons Girls, Long John Baldry, Millie, The Jets, and NEMS artists Cilla Black and Sounds Incorporated. It was first broadcast in the UK on the ITV network on 6 May from 9.45pm, and in the US by ABC on 15 November. 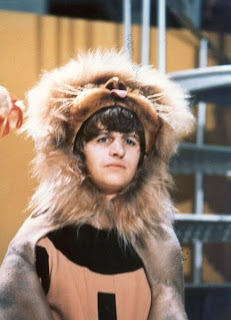 The Beatles took part in two segments in the show: a musical set and a spoof of Act V Scene I of Shakespeare's A Midsummer Night's Dream. John Lennon, Paul McCartney and George Harrison also mimed a trumpet fanfare at the start of the show, before Ringo Starr appeared with a flag to set off a cannon ball. The group also introduced PJ Proby's performance.
For the Shakespeare spoof, Lennon took the female role of Thisbe, McCartney played Pyramus, Harrison was Moonshine and Starr played Lion. Incidentally, McCartney later owned a cat he named Thisbe.
The songs performed by The Beatles in the show were Twist And Shout, Roll Over Beethoven, I Wanna Be Your Man, Long Tall Sally and Can't Buy Me Love, as well as a special medley of their earlier hits - Love Me Do, Please Please Me, From Me To You, She Loves You and I Want To Hold Your Hand - and finally a version of The Isley Brothers' 1959 song Shout. The Beatles concert segment was released on laser disc (in Japan and USA) and video cassette (in UK) in 1985 as "Ready Steady Go! Special Edition The Beatles Live".
The music had actually been pre-recorded at London's IBC Studios on 19 April 1964, and The Beatles mimed during the show. The seemingly legitimate DVD The Beatles Around The World has the entire show, but the quality is not as good as the old VHS.
The Shakespeare skit was then colourized and released on the DVD The Beatles Explosion in 2008.
You can read the lines here, they're from Act V, Scene I of A Midsummer Night's Dream. You've got to scroll down a third of the page, to the stage direction "Enter Pyramus and Thisbe, Wall, Moonshine, and Lion", that's where the skit starts. 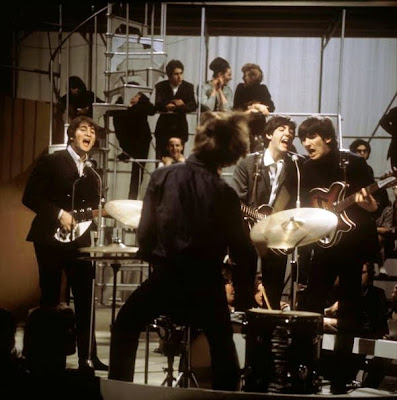 The songs I Wanna Be Your Man, Long Tall Sally, Boys and Shout! from the "Around The Beatles" special was released on The Beatles' Anthology 1 album in November 1995.
Posted by wogew at Sunday, September 12, 2010