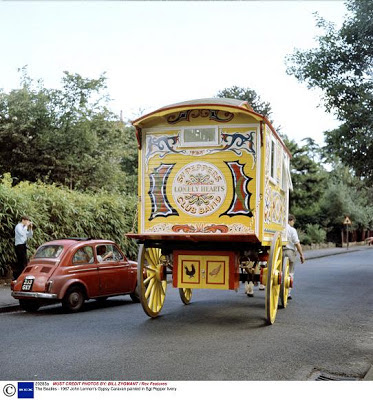 The 1967 "Sgt Pepper"-inspired caravan that John Lennon gave to his son Julian has reappeared!

Back in 1982, the very first time I came over to England, I was peeping over the hedge at Tittenhurst Park in Ascot and I could have sworn I saw it. Turns out I probably did. Bracknell News has the full (although riddled with historical mistakes) story.
Originally called a Burton caravan, it was repainted by Steve Weaver at a garage in Chertsey to the specific designs of John Lennon and transported on July 24, 1967, to Kenwood, Weybridge, Surrey where Lennon was living with first wife Cynthia and son Julian. You can watch a British Pathe newsreel about the transportation of the caravan here. Said to be a birthday present for Julian, it was a belated one, as Julian had turned four in April.

After a spell in Ireland, where Lennon bought an island with second wife Yoko Ono, the caravan was moved to John's new home in Ascot to stand in the garden of Tittenhurst Park. Ringo Starr then acquired the caravan as part of the deal when he bought Tittenhurst Park from Lennon in 1973, after the Lennon's had moved to the USA. Ringo called in Cookham-based, vintage caravan restorer John Pockett to restore it. It took almost a year and by September 1983 was returned, in its full glory, from Pockett's Cookham workshop, to be placed beside Ringo's swimming pool. The caravan seemed to have disappeared without trace after the Ringster sold Tittenhurst Park for £5 million to His Royal Highness Sheikh Zayed bin Sultan Al Nahyan, President of the United Arab Emirates and ruler of Abu Dhabi (The Sheik of Araby for short) back in 1988.

I remember hearing about the sale, and that the sheik was only planning to use the house for a week each year, during the Ascot horse thingy. He completely refurbished the house, throwing away all sorts of Beatles memorabilia in the process, including the sound studio which had been installed by Lennon and subsequently used for recording the twin "Plastic Ono Band" albums, "Imagine" and Ono's "Fly". The studio was also used by Ringo after he bought the place in 1973, he let it out to other musicians. Famously, Judas Priest was going to use the studio to record the band's album "British Steel", but ended up recording it in the house itself.

So I feared that the sultan had just discarded the wagon, but Bracknell News paints a different picture: It appears that Ringo took the caravan with him when he moved to a property in Longcross, Surrey. It was left behind there when Starr subsequently moved again. The person who bought the Longcross property from Starr then rented it out, and finally sold up last year. The caravan was then given to Alan Carr, a well-known Ascot resident and charity fundraiser, who plans to use it as a vehicle for his charitable fundraising efforts. Sadly, the roof and most of the sides of the caravan are missing.

The money raised by the sale of the caravan will go to the appropriately named Imagine Fund, and let's just hope that the lucky buyer will be Julian Lennon. After all, it's really his belated 4th birthday gift.

Source: Bracknell News
More photos here.
And...the Kenwood blog beat me to the story, I later discovered. But it's only appropriate.
Posted by wogew at Friday, May 24, 2013